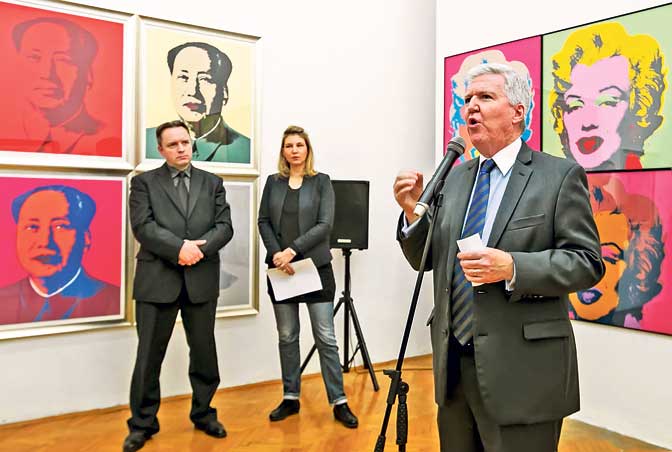 The US Ambassador to Serbia, Kyle Scott officially opened the exhibition, and said that the 1950s and 1960s in America were the periods of great changes, and technological, demographic and industrial boom. As a result, Americans had easier access to industrial products, houses became bigger and more affordable, each had a TV set and culture became an integral part of everyday life.

“These artists, whose work is exhibited here today, are a product of that consumerism, just as I am a product of baby boom”, the Ambassador said.

Inspired by comic books, designer Roy Lichtenstein became a leading figure in the new art movement, and his work defined the premise of pop art through parody. James Rosenquist was known for his colossal collage paintings of enigmatically juxtaposed fragmentary images borrowed largely from advertisements and mass media while illustrator Tom Wesselmann became famous for his collages, sculptures, and screenprints that stylized the female figure.

John Chamberlain made sculptures out of vehicle waste, while Andy Warhol, who was originally hired to design shoe ads, gained worldwide fame for his portraits of American celebrities, including the iconic portrait of Marilyn Monroe.

Američki pop art Andy Warhol Art gallery exhibition graphic print James Rosenquist John Chamberlain pop art print Robert Rauschenberg Roy Lichtenstein Serbia Speedskater Tom Wesselmann travelling exhibition Visconti Fine Art
We use cookies to ensure that we give you the best experience on our website. By continuing to use this site you consent to the use of cookies on your device as described in our Privacy Policy.OK